It’s official — “Song of the Middle Manager” has launched!

Today is the official launch date of “Song of the Middle Manager,” my third book of poetry. It’s now available online at BookPeople, Amazon, Barnes and Noble, Walmart, Ingram, Grayson Books, and elsewhere. Search for “Song of the Middle Manager.” I don’t have any spare copies myself, but if you’d like a signed copy, just purchase the book and mail it with a return address to me at 2707 Harleyhill, Austin, TX, 78745. I’ll sign it and mail the copy back to you. I’ll cover the return postage since this is all in the name of friends, family, community, and the cause of poetry. Thanks everyone for your support. 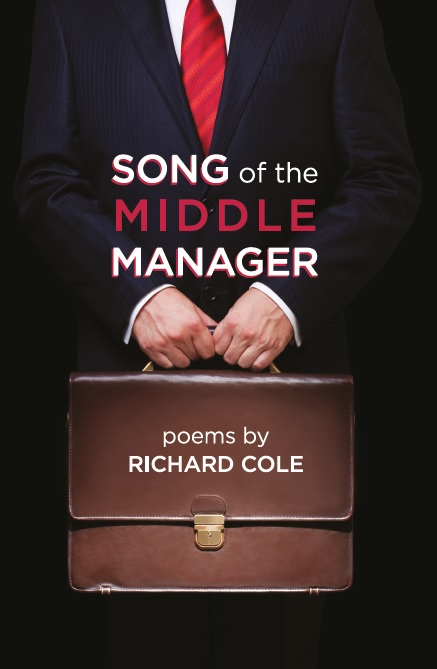 I don’t know if Opening Prayer is going to be my last book, and maybe that’s the best way to proceed. It seems that I have to live the books as I write them, and every lurch forward involves some sort of sacrifice, a giving up of what I no longer need, assuming I ever needed it to begin with. Last year, I decided to burn my notebooks, starting with a little gray journal I kept when I was 12 and solemnly declared in secret that I was an atheist. The stack was almost two feet high — Big Chief notebooks, school folders, loose-leaf binders, fancy little Moleskines, you name it. I’d already dredged through the lot when I wrote a memoir a while back, and I knew that the entries were mainly just grousing and existential agonizing, familiar stuff to most writers. Still, it represented a lifetime of diligence, a sense of self. I started burning the oldest one first, then the high school pieces, then college. After 20 minutes, I still had most of my adulthood left and the ashes were filling up the fireplace, so I put the rest in garbage bags and left them on the curb for the weekly trip to the landfill. “Wet garbage” as they say in recycling. Earth to earth.

That was a good feeling, getting rid of all that paperwork. I felt lighter, unburdened. You’ll notice fire as a theme in this book, and I keep in mind that creation depends on some sort of destruction, a tearing apart or reconstitution, as in cooking, carpentry or religious conversion. To be reborn completely, we have to die completely, no fudging. I’m 65. I’ve given up being a writer several times, and I keep trying to reach the silence that makes a place for language, that allows it to be understood, and a language that points to silence. At times, I think I’m making real progress. Then something happens.

The next four posts will be taken from the preface of “Opening Prayer,” my third book of poetry. I’ll be explaining what  I’ve been trying to write over the past four decades as a poet and how the three books follow, for better or worse, the development of a spiritual career.

Over the years, two themes have emerged in my writing. The first is how we make a living — money, work, business, corporations, and everything we mean by “trade.” The second is the inner life, which in my case has included poetry, painting and a religious conversion. Their ongoing development, including their complex, uneven marriage with one another, is much of what this present book is about.

I wrote my first book, The Glass Children, when I was trying to lead the ideal writer’s life, at least my notion of what that was. I lived on day jobs and little grants, delving inward to escape relationships or any responsibilities whatsoever beyond a dedication to the page.

When I stand at the brilliant edge of the roof,

There is always the man who continues forward

Without hesitation, slipping smoothly out of my skin

And I’m lost, watching the back of his head,

His strong arms spreading open as he steps

Soundlessly over the edge.

That seemed like a kind of courage at the time, but I was trying to make a religion out of art. Why not? Like so many young writers, I wanted to astonish. Beyond that, I felt there was something at the very core of things that I could reach if I only wrote well enough. At times, transcendence made a brief appearance. The book’s last poem, “In New York the Women Are Dreaming,” served, I thought, as a grand prelude, a kind of announcement of a new life, but the poem’s energy, a feminine energy, was all the greater from being checked, contained and forced inward. The book began with an image of limestone caves and ended with an emergence not yet achieved. Art was a beautiful shell. I was listening to music I couldn’t hear.

I came to New York to get what I could, but Success Stories shows what I had to give up. Maybe our life there was a way of subtraction that God might use to separate us from ourselves — not from the selves that He creates but from the ones that we make up, our egos that constantly fret, compete and compare. In my book, the last image is a library filled with empty pages. It seems to me like a kind of achievement, and I like to think of the book ending in silence, as close to the Truth as I could get at the time, standing on the other side of the glass.

Another chapter. Eleven years of New York
madness is finished, and we’re moving away.
I cull out all the books I’ve read and forgotten,
asking myself what a man truly needs at forty five.
I’ve forgotten what little I understood
of Hegel and Locke, whole kingdoms
of plants, the meanings of quarks,
the Five Good Roman Emperors,
math, the novels of Proust,
and a rolling thunder of conjugations
in four different languages, even my own.
I save the poetry for last. Rows of aging
paperbacks with cracked spines,
yellowing pages. I look at the margins,
the furious comments, words underscored
two, three times, exclamation points … Oh what
was I trying to love?

In the middle of life, I see myself still waiting
outside a library deep in the woods.
I stare through the window: tier after tier
of books bound in white leather, and I understand
now that the books are empty, nothing
but soft, blank pages. I press my hands
to the cold glass. This is my heart,
this silent building in the dark fir trees,
and the lights are left burning all night long.