That Nature is a Heraclitean Fire 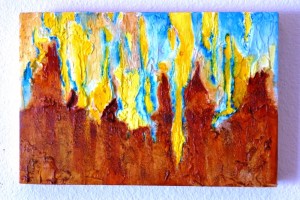 Gerard Manley Hopkins’ poem keeps moving through my head. This painting is called “Fire Root.” I built up a thick landscape of acrylic molding paste, let it dry, and then followed the bumps and contours of the little ridges and valleys of paste. (The painting is just a bug, 8 inches square, but a bright bug, part of my series on fire and combustion. “Million-fuelèd, | nature’s bonfire burns on..”

Posted in Art, Matters of Faith 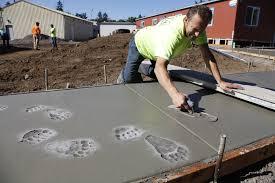 Liberal Catholics squirming in the back seat of the Church are still looking for signs of change under Pope Francis. Yes, we see new leadership at the Vatican Bank. Yes, the Vatican has defrocked archbishop Jozef Wesolowski who was accused of sexually abusing boys while he served as the pope’s representative in the Dominican Republic. And yes, Bishop Franz-Peter Tebartz-van Elst of Limburg, Germany, lost his job after spending $43 million on a new residence and office complex.

However, we’re not there yet. In the U.S., the Conference of Catholic Bishops held their Spring General Assembly last month with very little to report. The bishops listened to presentations, voted to extended ad hoc committee work and approved limited revisions to existing documents. Business as usual. We can also note that Bishop Robert Finn of Kansas City is still in office 18 months after his conviction for failing to report a priest suspected of abuse. Los Angeles Cardinal Roger Mahony, Cardinal Bernard Law and other prelates enjoy retirements or comfortable reassignments in the wake of similar allegations regarding abuse by priests under their jurisdictions.

For many Catholics, the discouragingly slow pace of institutional reform represents a similar opposition to change in Church teachings. What really divides us is the Church’s position on matters of gender, sexuality and hierarchy. Conservative Catholics argue that the Church’s teachings have never been and should never be changed from what was divinely revealed. Liberals, as they say, are “cafeteria Catholics,” picky eaters who only choose what suits them. On the other hand, we might introduce a new term here — “concrete Catholics” — where every Catholic position is set in concrete and reinforced by rebar, resisting change even if the world changes around the Church and ultimately leaves it behind.

As a member of the Catholic family, I see myself somewhere in the tortured middle. If the Church is a cafeteria, that means it’s a business where the customer is always right. If a particular item doesn’t sell, it’s taken off the menu. But as Catholics, we’re not customers of Christ; we’re followers of Christ, and our faith is not a matter of preferences. At the same time, if the Church hardens into rock, it ceases to become the living body of Christ, alive and open to the guidance of the Holy Spirit.

Both extremes are necessary, and, equally important, both need the other. Concrete says no. That’s its job. That’s how foundations work, and the Church needs strong foundations to support the deposit of faith — the scripture, teaching and traditions handed down through the centuries. That deposit doesn’t change. However, what does change is our understanding of how we apply it to a modern world. Vatican II wasn’t business as usual. The implications of the Council are still being worked out, but that’s my point. Our Church is a pilgrim church moving along, however slowly. Even a glacier is a river. In fact, slow can be good. That’s how you get to be 2,000 years old. We’re not there yet, wherever we need to go, but we’re always moving and always at the speed of God. 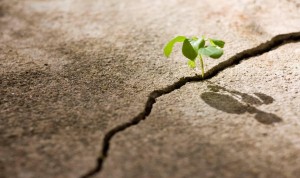 Think about love. It can be glorious and it can be painful. The Romance languages know this. Amore and amour mean literally “to death.” A-morte. I love you to death. That little arrow from cupid can really hurt, even if it’s a blessing. And look at the word “blessing.” It comes from “blodden,” an Anglo-Saxon word meaning to bloody, as in an animal sacrifice. We can’t sacrifice what we don’t break open, even violate in some way. I once read that the word “blessure” in Old French means both “blessing” and “wound.” The Catholic Passion Week is a love story where wounds and blessings can’t be separated, and where each is needed to complete the sacrifice.

Being a word guy, I look up etymologies. It helps me think. I was thinking the other day about conversion and conversation. They don’t have quite the same roots, but their roots are side by side. Both words mean a turning about, and a conversation is an ongoing turning back and forth. A single exchange is usually just that — “a brief exchange” — but a conversation has a development, a career to it, each party building on what the others say. Unless it’s a poor conversation, we don’t talk past each other but with each other, both sides sharing, both sides gaining.

So too, conversion. It’s not a moment but a dialogue, an ongoing process. I believe that God is a listening God. He always listens as we talk — in prayer, in the way we live, in silence. But do we listen to Him? What has God told me today? What did I say in reply? Am I the girl in red or the girl in blue?