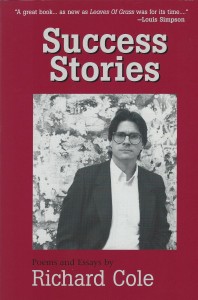 Lauren and I were married in New York. My day job of copywriting turned into a career that eventually supported a family. At the time, however, I wanted nothing of it. I felt cheated. I thought about teaching in workshops, but decided against it. I had already spent most of my 20s in academia, and I had the hunch that if I returned to the classroom, I would keep writing the same book over and over. So I gave up. I knew I couldn’t be a creative writer and work fulltime on Madison Avenue, writing brochures for IBM.

Then, oddly, something happened. The obstacle, the stumbling block, became a stepping stone, a kind of permission to stop writing what I thought were “poems” and start writing about money, jobs, paying the rent, and trying to keep the soul-spark alive in a corporation. The problem  of what we now call the work/life balance became the subject of Success Stories. My style grew plainer and at times (some readers would agree) crossed over entirely to prose. If poetry had been a religion for me, my faith was failing.

Was the book true to its title? Considering the irony of what I meant by “success,” I guess it was. Everything my wife and I attempted in New York fell apart, and yet after 11 years, we were still together, still very much married and now with a prayed-for son and another child on the way. I had come to New York for what I could get, but the book follows what I had to give up, a via negativa, a way of subtraction not from our true selves but from the ones that we make up, the egos that constantly fret, compete and compare. The book ends in silence, as close to the Truth as I could get at the time, standing on the other side of the glass. Failure. Surrender. Some kind of blessing.

In the middle of life, I find myself still waiting

outside a library deep in the woods.

I stare through the window: tier after tier

of books bound in white leather, and I understand

now that the books are empty, nothing

but soft, blank pages. I press my hands

to the cold glass. This is my heart,

this silent building in the dark fir trees,

and the lights are left burning all night long.

This entry was posted in Uncategorized. Bookmark the permalink.