Here’s what used to look like a wounded bagel, condition now stabilized. The orange is actually Indian Yellow, a beautiful color that I’m still trying to adopt. We might need just a bit more Alizarin red here.

I’m trying to depict a conversion, a turning toward something unexpected, a grace of light blue.  Originally, I was thinking about the narrative of before and after  — I was lost and now I’m found. But that seemed too simple. I remember what Joan Didion said: “I think we are well advised to keep on nodding terms with the people we used to be, whether we find them attractive company or not. Otherwise they turn up unannounced and surprise us, come hammering on the mind’s door at 4 a.m. of a bad night and demand to know who deserted them, who betrayed them, who is going to make amends.”

Aside from the portal at the center, I’ve left just a few edges here. While I was painting this, I was thinking about all the discussions in art classes and art books about edges, how to “steal” the edge, either from the figure or from the background.  But I was also thinking that mystics see beyond the edges. That’s a part of what they do.  I’ve been reading The Night of the Confessor by Tomas Halik — excellent book — and he says “Love is the only force that unifies things without destroying them.” Yes, I thought. That’s what’s I’m trying to do here and with other paintings these days. Unify things — soften the edges — without destroying them. Be on nodding terms with what I used to see.

Posted in Art, Catholic by Choice, Matters of Faith 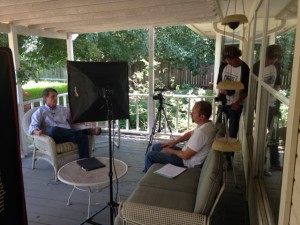 On Monday, Don Johnson from San Diego came by to hear me talk about my Catholic memoir. Don has quite a story. He’s been an evangelistic minister for  a number of years at Don Johnson Ministries. For various reasons, he was drawn to the Catholic Church, and now he’s going through the RCIA! Naturally enough, he’s interested in other converts, so he’s making a documentary about people like me who entered the Church as adults.

The interview was held on our backyard veranda, in between jets passing overhead and brief frenzies of barking by the chihuahuas two doors down.

Patheos has selected Catholic by Choice for their Book Club in the second half of April. Google “Richard Cole Patheos” and stuff should come up, including a video interview, an article I wrote, and several blog reviews of the book. Also, Margaret Felice has posted “3 Questions with Richard Cole” on her blog.

If you’d like to hear me holding forth on the “Morning Air” show on Relevant Radio, go to the archives, March 17th and click on my name http://bit.ly/1g6Fbx9.  (Now if I can just learn to speak in complete senten 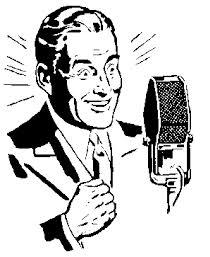 And Now, the Press Release: “New Book Recounts Writer’s Winding Path to a Life of Faith”

Award-winning writer Richard Cole presents a love story about conversion and the honeymoon of faith in his new memoir, Catholic by Choice: Why I Embraced the Faith, Joined the Church, and Embarked on the Adventure of a Lifetime (Loyola Press, March 2014).

Catholic by Choice looks at Catholic conversion from the point of view of a modern adult convert, telling a relatable story of spiritual discovery, doubt and eventual happiness. Cole tells his story with candor, pointing to the tone of openness set by Pope Francis as his model. The irreverent humor and deep joy found in faith will call to mind a Catholic, male Anne Lamott.

Cole’s story began sixteen years ago when he visited a Benedictine monastery in South Texas for three days of peace, quiet, and uninterrupted reading time. Although an unbeliever at the time, his brief getaway lit a spark of faith that began “an intense, painful, and utterly dazzling” time in which Cole fell in love with God, became a Christian, and joined the Catholic Church.

Cole grew up nominally Protestant with little understanding of Catholicism. As strange an experience as religious feeling was for him, he felt increasingly drawn to the Catholic Church, with an intensity that made him feel like his “heart was going to explode.” The strangeness was part of the attraction, he admits: “Catholicism was my exotic country, and along with everything else, I loved it because it was foreign to me.”

Cole discovered that the hardest thing about becoming a Catholic for him, a recovering alcoholic and introverted poet, would be carrying his faith into the world, “coming out of my nook, and living as a Christian with my wife, kids, and everyone at work.” He writes about the tension his newfound faith caused at home. His wife, a former Catholic immersed in New Age spirituality, was supportive but frustrated by Cole’s lack of respect for her explorations, and the distance his conversion was creating between them. “I wanted both of us to be on a path of discovery, but I wanted her path to be just like mine,” Cole writes.  “Converts want the whole world not only to convert but also to convert the way they have.”

“The Catholic Church and culture understand how unstraight the human heart can be,” Cole writes. “So do other churches, of course, but I felt that Catholic understanding was deeper, if only by the sheer weight of experience.”

Richard Cole is the author of two collections of poetry: The Glass Children and Success Stories. His poetry and prose have been published in The New Yorker, Poetry, The Sun, Hudson Review and Image Journal: Good Letters. He works as a business writer in Austin, TX. Learn more at www.richard-cole.net.