This was a challenge. Well, most of them are. Too much like a Christmas flower. Then the magenta emerged as a kind of protective shield. So there you have it.

Earthenware for the Voyage Home

Next in the portal series. Oil mixed with sand. Like the other portals, the portal inside leads you to the space where you began.

Art on Fire: The Life and Work of Melissa Weinman 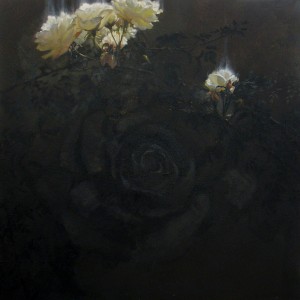 I’ve long admired the work of Melissa Weinman, a Washington-based painter who works with images of faith. The image above is part of a series she calls “rosefire,” inspired in part by the last lines of Eliot’s Four Quartets. Image Journal is posting my article that describes her faith journey and how it has influenced her painting. More at http://www.patheos.com/blogs/goodletters/

I’m adding a new page for paintings. I’ve given up — often a cagey move — on trying to understand how all this fits together, the writing, the painting, the whatever it is that I do. “Share your eccentricities” is the advice an editor once gave me, so here we go.

The poems in Opening Prayer were written after we had moved from New York and landed on the shores of  Austin, Texas. The first section was drawn from my experience in business over the years, including ad agencies, freelancing and four software startups, two of which imploded and crashed, leaving few survivors.

I think it’s too easy to think ill of business. For most of us in this country, it’s where we spend the bulk of our waking hours. It can bring out the best in us, and the early years (or months) in some of those startups were glorious. I remember days when I found myself in the office at 7:00 in the morning and still there at midnight, giving everything I had to something larger than myself. I wanted to believe.

At the same time, believe me, I know that business can be savage. Survival has to be one of its mandates, and in many cases survival trumps decency or even basic morality if it comes to that. I think of business, corporations in particular, with images from ancient Egypt, a society that valued hierarchies and efficient organization, supported by a religion, successful for thousands of years, dedicated to mortal preservation, wealth and deathless monuments. If death is married to business, then most of us, directly or indirectly, earn our living as the necessary offspring of that marriage.

As I jumped from one startup to the next, my life began to feel like a piece of bad writing, like an essay that you get back from your English teacher with comments in the margins: “Be specific!” or “Use concrete images.” I wasn’t going through any crash-and-burn crisis. No divorce or mental breakdowns. I didn’t run off to South America and study with shamans. I just had a sense of creeping mediocrity. I was supposed to be famous by now. What had happened?

One of the last pieces I wrote for this section was “Song of the Middle Manager.” The divided life, the conflict that I felt in New York of art versus business, business versus the human spirit, remained inside me, but here I saw a man who had made peace with what he had done and failed to do. He felt a pride, however battered, in his business career. When I wrote this, I wasn’t a believer, but I wanted very much to give this man something that suggested belief. As in the poems from Success Stories, his career had been measured by subtraction. Despite this or because of it, his dreams were “smaller but stronger.” He was dogged, but he wasn’t a fighter. He “walked through other doorways filled with light.”

Approaching 50, I went for a brief visit to a Benedictine monastery in South Texas. Again, something happened. I fell in love, first with the Mass — it was poetry — and then with God and the Catholic Church.

The second section was written after this conversion. What had seemed like a series of dead ends in my life turned out to be, I believe, a necessary preparation for what happened at the monastery — and not just certain events but those events in that order. If I had found the Church at 23 or even 43, who knows what weird little pocket of faith I might have fallen into. As it was, I think everything happened on schedule but God’s schedule, not mine.

The title of the third section, Economy, has a double meaning; economy in the sense of capital economies and economia, the working out of God’s plan in the world. Most of the poems are about a balancing act of some kind. That makes me think of the Taoism I studied when I lived in New York —  not just the balance between yin and yang but the understanding that at the very center of each is its opposite. Actually, I’d argue that Taoism shares that understanding with Catholicism. Faith and reason, the physical and metaphysical, Good Friday and Easter all come as a package deal. No trade-offs. It’s “both/and” instead of “either/or.”

I also discovered as I wrote through this section — and the book is arranged generally in the order that the poems were written — that conversion requires a belief in conversion itself, just as marriage requires belief in marriage itself as a possible institution. I’m not the man I was before becoming Catholic, but on any given day, I shake my head in disbelief at what remains inside me, the person I used to be and still need to acknowledge.

The work in the fourth section took an unexpected turn, focusing on the artist and creation of various sorts. Yeats suggested that if we can’t know the truth we can embody it (a very Catholic, incarnational view, by the way). I would add that we can also attempt to show it. That’s one of the reasons why the book contains a series of paintings. When I was growing up, I didn’t write much at all; I painted. I’ve never been in a writing workshop, I only started writing seriously when I was in grad school, but I’ve taken more art classes than I can remember. . That might be the reason why a poem is always a sort of painting in my mind – a cluster of images that “talk” among themselves, the way a painting works.